Is the F Pattern Still Worth Considering in Your Content Marketing?

For almost 15 years, the F pattern has dictated the world of digital marketing and web design. Designers and content creators have worked tirelessly to make their web pages conform to their visitors’ gaze. Now, in 2020, it’s time to rethink the F pattern. Is it still effective? Or have website visitors’ viewing habits changed over the years?

What Is the F Pattern?

The F pattern was a discovery released in a 2006 study from NNGroup. Researchers used eye-tracking software to see where people focused their gaze when they looked at various websites.

What they found was that people typically scan websites in an “F” shape. They start at the top and read horizontally. This forms the top line of the “F.” Then, they’d skip down a few lines and read another, shorter horizontal section. This is the second line in the “F.” After scanning the top two sections, readers tended to scan in a vertical line moving down the page, which finishes off the stem.

While the “F” wasn’t always clear cut, study participants followed a similar eye tracking pattern. They’d scan the top section left to right and then make their way down the page. Sometimes the heatmap would come out looking more like an “E” or an inverted “L,” but generally, this was the pattern seen by most participants.

Implications of the F Pattern in Web Design

The main takeaway from the F pattern study is that people don’t read all the content on a page. They don’t even read half! The average website visitor will read only about 28% of the words on your page—and even that’s generous.

Instead of exhaustive reading, website visitors scan for the most important information. After all, the internet is all about fast results; nobody has time to read every word on a web page.

Here are some of the lessons learned from the F pattern in Web Design:

A lot has changed since 2006. Websites are more intuitive and immersive, and the rise of mobile devices has changed almost everything about web design. Is the F pattern still relevant in today’s world?

NNGroup had the same question, so in 2017, they conducted another study.

Without headings, pictures, or user interest, the F pattern still reigns supreme as the default scanning pattern. But this study also identified some other scanning patterns: 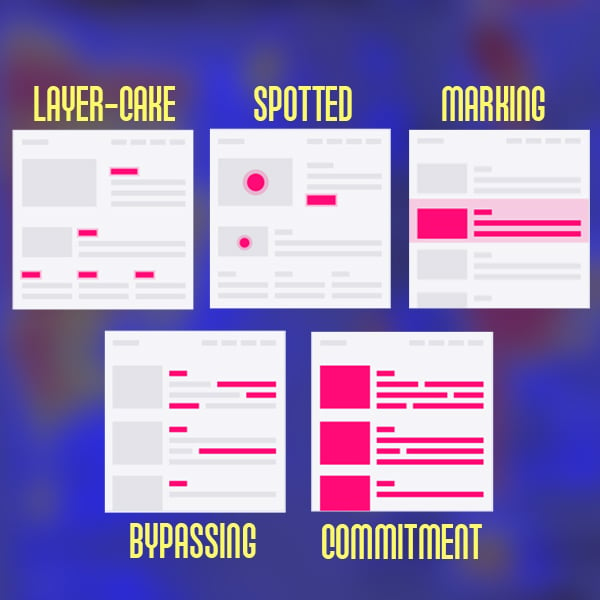 They also found that the choice of scanning pattern depends on four things:

As it turns out, the F pattern — although still alive and well in 2020 — is used only when website visitors don’t care about the content or if your webpage has a terrible, boring, unfriendly layout.

Consider the F Pattern in a Different Way

The F pattern is the worst eye-tracking pattern for both users and businesses. Users don’t get the information they need, and businesses can’t convey their message to the audience. It’s a lose-lose situation.

People use the F pattern for three reasons:

When all these elements come together, website visitors go to their default scanning pattern — the good ol’ F pattern — and skip over all your lovely content.

The major mistake was that web designers thought they should cater to the user when, really, it’s their job to guide the user to the most important information. Organize your webpages to draw users away from the F pattern and attract them to the information you want them to see.

With that in mind, is the F pattern still worth considering?

Absolutely -- but make sure you consider it with the above context in mind. If you know that this is a visitor’s default scanning pattern, use it to guide their eyes to more important information. Once you get them away from the F pattern, they might like what they see.

In the end, it’s up to you as a web designer and content creator to organize your information, format the webpages in an engaging manner, and create content your visitors actually want. Get them out of their bad F pattern habits and guide them to your content.