Web design is a funny thing. You can do everything right, follow all the best practices, develop a unique brand presence, and still walk away empty handed.

Why? It’s because all of the “best practices” you’ve heard about aren’t as easy to implement as you thought.

We saw a lot of great things in 2018, but as far as websites go, we saw people making the same mistakes over and over throughout the year—usually having to do with viable web design practices deployed incorrectly.

Let’s review a few of these and offer some insight into where they went wrong.

It’s becoming pretty common to see homepages adorned with video backgrounds that autoplay upon arrival. And why not? They’re engaging, impactful, and valuable to your brand identity. Or are they?

The idea here is that video engages; it shows users something cool and helps them understand your brand better they would through text or static images. However, not every company understands this when putting one together for their website.

Take video production company Wibbitz as an example. Yeah, it makes sense for a video company to have a video on their homepage. But what other purpose does the video serve aside from showing us that this video company can, in fact, produce video?

Even worse, the fast-paced and dynamic video clashes with the static on-screen text. It’s hard to read the hero text with so much video in the background, and many of the clips obscure the plain white text they’re using. Aside from distracting from the primary CTA, this video breaks one of the cardinal rules of web design: It increases cognitive load on the viewer rather than minimizing it.

This is a common problem with video backgrounds, and when you realize that they eat up bandwidth and decrease page load speed, it’s clear why some sources are advocating that video backgrounds be purged altogether.

If you’re planning to use them in 2019, make sure you’re using them with care.

Minimalist layouts are all the rage these days. They’re simple, clear, and elegant, giving readers just enough information to understand the company without overwhelming them with unnecessary detail. At least when it’s done well.

When done poorly, it can detract from the UX. Consider the growing practice of removing navigation bars and other hand-holding navigational elements in the interest of simplicity. It might look good from a design POV, but for the average reader, this choice can create confusion.

Check out tech company Evoulve to see what we mean. Now, some might call this effective minimalism that aligns well with the brand’s goals. And from what we can see, that’s sort of true. Unfortunately, they take it a little too far.

They offer nice details about their services, but they push so hard for that “futuristic” feel that it’s hard to know exactly what they do. Are they a web development studio? IT consultants? It’s a little hard to tell without a clear value proposition on the home page.

Keep this principle in mind as you move forward with your minimalist design. Don’t throw out the elements that work in favor of a sleek layout.

It’s crazy to us that so many websites still suffer from this problem in 2019. We’ve discussed this issue at incredible length in previous posts, so we won’t beat this dead horse much more. Just look at good ole Mr. Bottles for a quick example of what we mean.

Unfortunately, Mr. Bottles’ website suffers from a complete lack of a visual hierarchy. The navigation is fine, and the primary image is eye-catching, but once you start scrolling down the page, you get lost. It’s just a wall of text with some photos thrown in for good measure. There are no headers or elements that help users orient themselves on the page.

The goal of a visual hierarchy is to provide information to your readers in ways they understand. It’s not about what you say; it’s how you’re positioning the information. The most important elements (CTAs, value propositions, hero text) should be the first thing a viewer sees, with ancillary information coming later.

Now, this example isn’t e-commerce focused, so Mr. Bottles probably isn’t worried about conversion rate optimization. But for any digital brand interested in bringing customers into its marketing funnel, this type of website design is the kiss of death.

We were going to rake Pacific Northwest X-Ray over the coals for their website, but then we looked at the boilerplate at the bottom of the page: Copyright 1997-2018. We’re guessing this site falls a little closer to the 1997 side of things. What this means, of course, is that pointing out its flaws is sort of pointless. You don’t need us to tell you why this design doesn’t work; it’s pretty obvious.

Instead, we’d like to use this as an example of why it’s important to refresh your web presence every so often. Back in the 90’s, this type of web design was pretty common. It was a brave new world, and none of us knew what we were doing.

However, at a certain point, you’d think PNWX would have gotten with the program and updated its website to reflect the modern age, particularly with how knowledgeable they seem to be about their industry.

Their content is in-depth and authoritative, indicating that they want to position themselves as a thought leader their customers can rely on. Unfortunately, this is backed up by web design that just screams amateur.

It’s fine to start with a simple website when you first launch your digital presence. But at a certain point, you need to look at how your brand appears to others and whether your web design is dragging down your brand goals.

Approach Your Web Design With Care

Trends like minimalism and video backgrounds certainly gained popularity in 2018, but as we can see, it’s not enough to apply a concept and call it a day. When handled poorly, even “best practices” can backfire.

If you want to build a sleek and sexy web presence that sticks out in your viewers’ minds, you’ll need to approach these ideas with care. Work with professionals who have experience in the industry and always be willing to adapt if things didn’t turn out the way you planned. 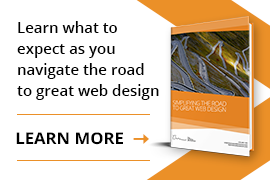 This entry was posted in Web Design by Matt Stewart