Don’t Make These Mistakes in Your Website UX Design 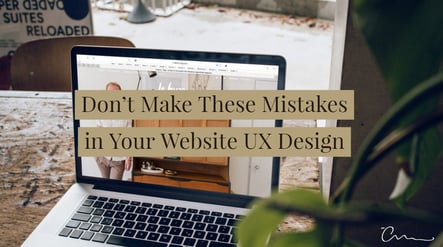 When asked what constitutes good design in the real world, design icon and visionary Don Norman responded that it’s good when you don’t even realize that you’re using it. In that sense, UX can seem like a thankless job where your best efforts to create intuitive, coherent, and seamless design come with the ultimate intention of being second nature to users and, therefore, go unnoticed. On the other hand, when UX is bad, your website will definitely garner some attention.

Human beings have a knack for disobeying instructions and behaving unpredictably. Those are just two of the eternal struggles of a UX designer. However, the fault of bad UX design rests on the shoulders of the designer, not the user. Even great UX designers can make mistakes that make sites difficult to use.

Don Norman served as a user experience architect for Apple in the ‘90s, co-founded the Nielsen Norman Group, and holds advanced degrees in both cognitive science and psychology. However, he’s best known for coining the most immediate and relatable example of bad design: the Norman Door.

The Norman Door is that one down your office hallway that you’ve entered a hundred times but still push instead of pull. It’s the door at the bank with the vertical handle that buckles and rattles for your fellow patrons as you attempt an enthusiastic entrance, insisting that you go the other way. It’s the one that makes you angry by the very fabric of its existence, standing defiant and unmoved at some regular junction in your life. Perhaps in that regard, the Norman door is a feat of design.

Why should a door require instructions?

At a certain level of complexity, your design will require some study by the user, and good UX design embodies discoverability: the ability to discover what operations a design can perform.

Visual cues, feedback, and anticipating user reactions through testing and research all go into discoverability to create features that users can figure out with minimal interaction. When one of your features sits unnoticed in the corner of the screen or avoided at all costs, you’ve designed a Norman Door.

How could one prove that anyone else is real? Who’s to say that we aren’t simply living out a dream in which only our consciousness is real? Who could prove that?

These are all great questions – best left to long deceased French philosophers and not your UX team.

Without research, prototyping, and testing, it’s easy to design a product for yourself, but you’re dealing with other conscious beings. Countless hours spent poring over your website, app, or invention creates a kind of myopia about flaws and unintuitive aspects of your design.

The feedback of your team isn’t enough to prevent a product with major lapses in UX design. The design may seem just dandy from an in-house perspective. And this is why you must conduct both quantitative and qualitative research during development.

The joke goes that a QA engineer walks into a bar, orders 9999 beers, 0 beers, a tutu, and the color blue, to which the bar tender simply shrugs. A customer walks in, asks where the bathroom is, and the place bursts into flames.

Relentless testing can still fail to anticipate the behavior of your users and leave your design woefully unprepared for launch in the real world.

So, the simplest solution is to wrest control away from your users. At least that seems to be a wrong approach plaguing UX design.

Scroll hijacking, relentless CTAs, and auto-cycling carousels without navigation are all examples of bad UX practices that put your user in a corner.

Affording your user a sense of control is critical to good UX design, and taking it away from them is a surefire negative. The best way to win a subscription or land a sale is to cultivate a relationship with your user through quality content, great UX design, and a competitive product. If you manage to land that mark, you won’t need to beg for a subscription. Conversely, subpar offerings aren’t going to land you conversions no matter how many times you impose them on your users.

Both total visits and time on site are neck and neck on mobile versus desktop. It almost goes without saying that you can’t afford to ignore responsive design for mobile users with any digital product that you plan to launch, with many products being strictly targeted towards mobile users.

However, it isn’t often that competent modern UX designers fail to consider mobile altogether so much as they overlook how different these experiences can be based on a specific device. Responsive design insures that your website will run across different devices, but it doesn’t insure that it will run well.

The unifying point of most UX mishaps often comes back to testing and research. Even the most talented team of designers comes up with only a series of best guesses when they’re operating in a vacuum. Hard numbers, qualitative surveys, user testing, and more user testing are always going to add extra polish to your end product.

This entry was posted in Web Design, User Experience (UX) by Matt Stewart